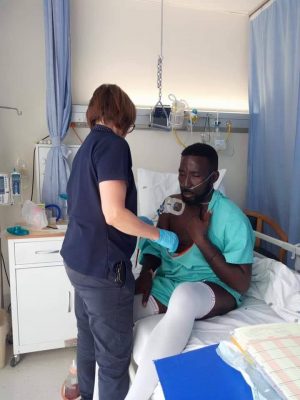 Please DONATE again to Save Paolo

Last year we had a $25,000 target fundraiser to get Paolo the heart surgery he desperately needed. Because of your generosity, we raised $1700 within 3 days of starting the campaign, before the Cross River State Government under Prof Ben Ayade made available N10,000,000.00 for the shortfall.
The surgery, a right thoracotomy was carried out in South Africa by Dr. E. Zigiriadis FC Cardio Inc. of Netcare Krugersdorp Private Hospital, Mogale City.
He successfully excised 2 large masses in the chest which on pathology were malignant metastatic thymoma.
The lower mass and posterior one was completely excised and partially adherent to the diaphragm and right lower lobe which a partial resection of the basal segment with the tumor was also performed. The diaphragm was also repaired successfully. There was a second large mass abutting the heart which was debulked including partial resection of the right medial segment of the medial lobe. Approximately 30% remained as it was not resectable without causing harm.

Mr Ogbeche made a good recovery and was also seen by the consultant radiation oncologist Dr Mariza Tanmar of Donald Gordon Medical Centre 18 Eton Road, Park town Johannesburg, who recommended further radiation for approximately six weeks to gain control of the cancer.
Unfortunately, due to financial shortfall, this radiotherapy has not yet been carried out and Paolo’s health condition has relapsed to a point of emergency. The prohibitive cost of returning to South Africa for the procedure and the emergency situation of his health has prompted Paolo to seek alternative medical attention at the cancer centre of Lagos University teaching Hospital (LUTH) Idi Araba. The consultants at LUTH after evaluation have recommended an immediate radiotherapy which they can carry out locally to stem the spread of the cancer.

The cost of the procedure in LUTH and eventual post-radiotherapy evaluation with Dr. Zigiriadis is estimated at Three Million (N3,000,000.00) only.

To this end, this campaign is aimed at raising three Million Naira (N3,000,000.00) which will cater for the radiotherapy and the follow-up evaluation in South Africa.

We solicit your kind contributions through this campaign. Click on “Back Campaign” to donate